more about the AIMC

The idea for the association grew out of a two-day study on contemporary mosaic, and it became a reality through the efforts of Professor Isotta Fiorentini, Peter Fisher (1922-2000) and many Italian and international mosaicists and scholars. The idea was given official support by the Cultural Commission of the Municipality of Ravenna. Isotta Fiorentini, the historical heart and soul of the association, recounts how Peter Fisher, a journalist and art critic who frequented at  the studio of Renato and Carlo Signorini during those years, was instrumental in contacting mosaicists from around the world. Although German by nationality and a resident of London since 1956, Fisher considered Ravenna his beloved city and he spent time there every year. He argued that mosaic is a timeless, profound art. He  strongly believed in mosaic as an appropriate means of contemporary artistic expression, due to its intrinsic nature which enables the use of a stylistic pluralism, characteristic of our time. 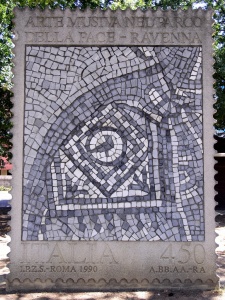 In 1987, the AIMC created a project  in Ravenna of particular importance:  a large public work of art, entitled MOSAIC OF FRIENDSHIP AMONG PEOPLES, at THE PEACE PARK. It is a permanent outdoor exhibition of mosaic works by contemporary artists from many countries, a unique open-air museum. The AIMC still enjoys the support of the City of Ravenna, which houses the administrative office of the Association at the Art Museum of the City (MAR), on the ground floor of the  Loggetta Lombardesca.  Since its foundation, the AIMC has remained active with conferences, exhibitions and publications aiming to promote contemporary mosaic throughout the world.  The Association has organized International Conferences and Exhibitions in:

AIMC continues to host a Congress every two years, each time in a different international location.  The Congress includes several days of activities, including presentation of works by members, speakers on relevant topics, exhibition of members’ works, a General Assembly meeting, as well as much informal networking, exploration of the cultural offerings of the locality, and fun!

Stay tuned on our website -page: AIMC Congresses- and newsletter for updates on the 2018 congress.

This website uses cookies to improve your experience while you navigate through the website. Out of these cookies, the cookies that are categorized as necessary are stored on your browser as they are essential for the working of basic functionalities of the website. We also use third-party cookies that help us analyze and understand how you use this website. These cookies will be stored in your browser only with your consent. You also have the option to opt-out of these cookies. But opting out of some of these cookies may have an effect on your browsing experience.
Necessary Always Enabled
Necessary cookies are absolutely essential for the website to function properly. This category only includes cookies that ensures basic functionalities and security features of the website. These cookies do not store any personal information.
Non-necessary
Any cookies that may not be particularly necessary for the website to function and is used specifically to collect user personal data via analytics, ads, other embedded contents are termed as non-necessary cookies. It is mandatory to procure user consent prior to running these cookies on your website.
SAVE & ACCEPT